Showing posts from September, 2019
Show all

It's hard living in a relativistic Universe, where even the nearest stars are so far away and the speed of light is absolute. It is little wonder then why science fiction franchises routinely employ FTL (Faster-than-Light) as a plot device. Push a button, press a petal, and that fancy drive system – whose workings no one can explain – will send us to another location in space-time. However, in recent years, the scientific community has become understandably excited and skeptical about claims that a particular concept – the Alcubierre Warp Drive – might actually be feasible. This was the subject of a presentation made at this year's American Institute of Aeronautics and Astronautics Propulsion and Energy Forum, which took place from August 19th to 22nd in Indianapolis. This presentation was conducted by Joseph Agnew – an undergraduate engineer and research assistant from the University of Alabama in Huntsville's Propulsion Research Center (PRC). As part of a sess
Post a Comment
Read more 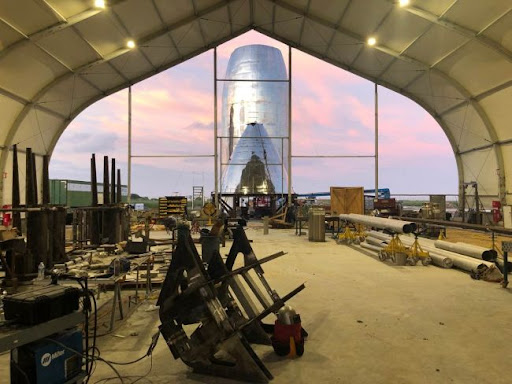 The craft will fly next month, if all goes according to plan. SpaceX's next Starship prototype won't be just a concept vehicle for much longer. Construction of the test craft is proceeding apace, as two new photos posted on Twitter today (Sept. 17) by company founder and CEO Elon Musk reveal.  One of the images shows the vehicle — apparently Starship Mk1, which is being assembled at SpaceX's South Texas facility, near the village of Boca Chica — in the background, standing behind a building that contains a variety of parts and other equipment. (SpaceX is also building a similar prototype, called Starship Mk2, at the company's Florida facilities, reasoning that a little intracompany competition will improve the vehicle's final design.) Droid Junkyard, Tatooine pic.twitter.com/yACFR9y04P — Elon Musk (@elonmusk) September 17, 2019 "Droid Junkyard, Tatooine," Musk said via Twitter , referring to Luke Skywalker's home planet in t
Post a Comment
Read more

It's 50 years since man first stepped on the moon, and we're still harboring dreams of escaping life on Earth for the mysteries of space. If a career as an astronaut isn't for you, perhaps the promise of a sojourn in a space hotel might be appealing. Californian company The Gateway Foundation has released plans for the Von Braun Station, a cruise ship-style hotel floating among the stars. The aim is to get the hotel off the ground by 2025 and make it fully operational for travel by 2027. The Von Braun station is just one such space-based tourism option in development. Also planning to propel people into space are Virgin Galactic, Elon Musk's SpaceX company and Amazon CEO Jeff Bezos' Blue Origin aerospace company, not to mention the International Space Station -- which recently announced the possibility of commercial collaborations. The Von Braun Station is also not the only space hotel design in the works. Earlier in 2019, US-based space tech startup Orio
Post a Comment
Read more 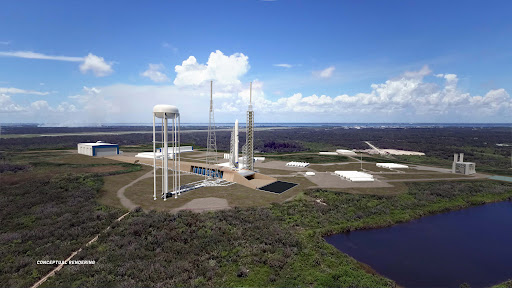 Work on Blue Origin’s New Glenn launch complex – LC-36 – is well underway. Recent aerial imagery of Cape Canaveral from NOAA shows how far Blue has come on the launch complex. Meanwhile, the company is also working on an engine factory in Alabama, and a first stage refurbishment facility near Kennedy Space Center. LC-36 – from Atlas-Centaur to New Glenn LC-36 was originally constructed to launch the Atlas-Centaur – with its revolutionary liquid hydrogen-powered upper stage. The complex hosted its first launch on May 18, 1962. Due to the Atlas-Centaur’s increasing flight rate – and low reliability early on – a second pad – LC-36B –  was built near the existing LC-36A. Throughout the 1990s, the complex was modified to launch the Atlas I, II, and III rockets. LC-36B hosted the complex’s final launch – the final Atlas III – on February 3, 2005. The site was deactivated, and Atlas launches moved a few miles north to SLC-41. In 2007, the service structures at LC-36 were demolished to
Post a Comment
Read more

September 04, 2019
"Humanity is the means by which evolution has determined to achieve its end... Not to act in building civilizations beyond this planet is quite literally to go ag ainst the very demand of the universe. If we are resolved to participate in this effort, we must be willing to get very close to the evolutionary tension throbbing within us, and boldly act in accordance with it." - Steven Wolfe, 'Space Settlement: The Journey Inward', Ad Astra, January - March 2004
Post a Comment
Read more

NASA is helping SpaceX get a fix on potential landing sites on Mars for its Starship super-spaceship, with an emphasis on Arcadia Planitia and Amazonis Planitia, regions where deposits of water ice may be found. Another focus of NASA’s reconnaissance campaign in Phlegra Montes, a mountainous area just west of Arcadia Planitia in Mars’ northern hemisphere. Pictures of the candidate sites were captured from orbit by NASA’s Mars Reconnaissance Orbiter in June and July, and included in last month’s roundup of MRO imagery. Science writer Robert Zimmerman brought the Arcadia-Amazonis sites to light last week on his Behind the Black blog, and dubbed them Site 1, Site 2, Site 3, Site 4 and Site 5. Sites 2 and 3 are a stereo pair of images. The other three sites on Zimmerman’s list have stereo pairs as well. Zimmerman said that his contact at NASA’s Jet Propulsion Laboratory declined to discuss the images due to a non-disclosure agreement, and that SpaceX hasn’t responded to his reque
Post a Comment
Read more
More posts